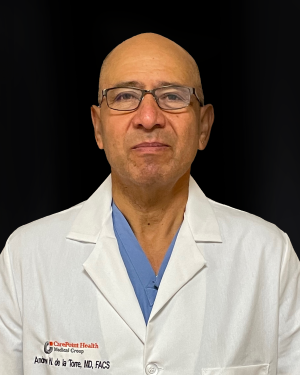 Schedule Now
Andrew de la Torre was born and raised in the Bronx. He attended New York City Public Schools, and graduated from Queens College. He received his Medical Degree from the Johns Hopkins School of Medicine in 1989, and completed his general surgical residency at the New Jersey Medical School, University Hospital in 1995. He then completed a kidney/pancreas transplant fellowship at the University of Maryland and liver transplant fellowship at the New Jersey Medical School. He was a liver transplant Surgeon from 1999-2010, where performed hundreds of complex liver, pancreas, and bile duct surgeries. Dr. de la Torre has been performing major liver pancreas and bile duct resections laparoscopically since 2007. Dr. de la Torre started and led the liver program at St Joseph’s Regional Medical Center in Paterson, New Jersey from 2012-2017, and has been the Director of Liver, Pancreas, and Bile duct surgery, and Liver Disease Services at Carepoint Health since 2019. Dr. de la Torre is on the Medical Advisory Board of the New York/New Jersey Chapter of the American Liver Foundation since 2013, and a Fellow of the American Association for the Study of Liver Disease since 2020. Dr. de la Torre has authored and co-authored numerous publications in basic science, clinical science, and population health, and has been principal investigator on numerous clinical trials in liver and pancreas oncology, and hepatology. Dr. de la Torre is a specialist in population health using smart algorithms within electronic health record systems combined with patient navigation, and has received multiple grants to improve early diagnosis of liver disease, and cancers of the liver, colon, and lung.

American Board of Surgery